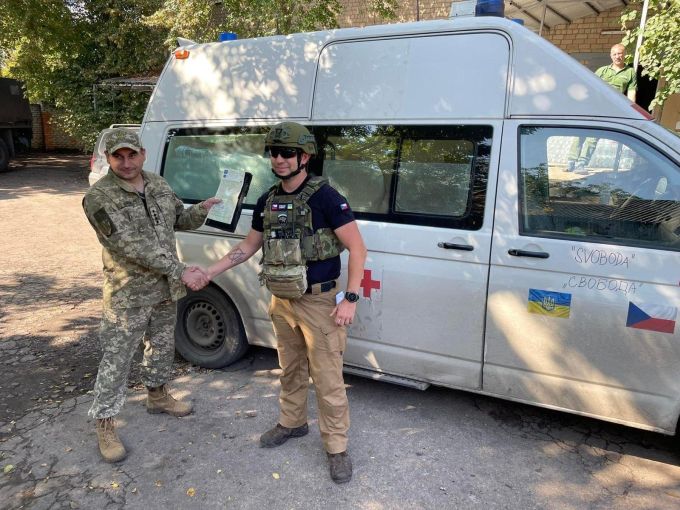 Our friends from Ukrainian armed forces repetitively asked us to find suitable  ambulance  cars to booster their capacity to transport severely wounded person from the frontline : Therefore, we have started this project .

First tactique chosen- to collect cars as a sponsor gift- was not succesful. Subsequently, we have decided to buy second- hand  ambulance vans  using crowdfunding. As a medium Donio.cz was used.

Using this money, three ambulances were purchased -two 2WD Ford Transit vans and a bit bigger VW Transporter 4WD, All of them were carefully checked by our mechanics to ensure that they will be operative as good as possible in harsh conflict zone conditions.

Administrative and transport preparations  have subsequently taken a bit more than 3 weeks.  We have carefully used every vans transport space to get as much medical equipment and materials as possible. Using our Twitter account we have contacted several groups of donors ( companies, group of donors but also individuals ( see their list below this article). We wish to express our gratitude e.g.  to Mr. Jan M. ( who purchased a couple of hundreds military pressure bandages), Ms. Zuzka M. ( a bunch of paramedic equipment ) and Mr. Ondra Č. MD. ( provided us with medical equipment including four pulmonary ventilators). Ondra has joined Team4Ukraine as a proper member in a short time afterwards.

Just before the transport to proximal combat area in Donbas from September 15th till September 25th 2022 a final preparations had to be done. We had to collect all the matherial and equipment gathered in an area kindly provided by another Team4Ukriane  supporter. As a non- profit organisation we target all the money to provide direct help and support Ukraine and connected fees and taxas. Because  we have gathered more material and machines than expected,   two another  transport vans had to be borrowed -thank you, Mr. Mamut and Mr. Jan K. !

On September 25th a final loading  was performed.  A majority of T4U members met in  loading centre and generally is this action commemorated as a joyful meeting.

The transport departed the Czechlands on September 26th 2022. The journey was peaceful, spent th night in Kyiv and Pavlohrad and finally, on September 29th  , somewhere in between Pavlohrad and Kramatorsk, we have handed our  8 cargo pallets of  surgical material, disinfection,  20 paramedic stretchers and all medical machines to 66th  ZSU field hospital support platoon ( Glory to the Heroes!).

All the material and machines were immediately utilized by 66th Field hospital. As a proof of well- known Ukrainian hospitality  we have been invited  by 66th ZSU field hospital commander- in -chief,  the head nurse and the support platoon commander to a brief but cordial breakfast which we have used to strenghten our cooperation and arrange what are crucial problem sand which medical material and assistance we could provide and ensure  to support their heroic effort .

Further we have been driving to Kramatorsk which have been heavilly shelled by invaders a dozen minutes just before our arrival. There we have handed over second ambulance ( called „Svoboda- The Freedom“) to paramedics of 54th ZSU Separate Mechanized Brigade. Apart from that, we have provided disinfection and  newborn diets to CIMIC locals  which provides its further distribution to Bakhmut- constantly heavilly shelled,attacked  but non- conquered and firm- standing historic ukrainian  town in Donbas.

From Kramatorsk we headed back to Pavlohrad where we spend the night and provided a bit more non- lethal military material to one of local military units  and  thereafter back to Kyiv. In the capital, a second and third of ambulances ( called „Naděje- The Hope“ and „Víra- The Faith“ were handed over to another ZSU military units. These units are not to be named, nevertheless one of them works in Kharkiv direction and the second  operated in Kherson direction .

Therafter we have driven back home to Czechlands. After a couple of problems with cars we have reached Prague on October 3rd.

Eight vehicles ( including 3 ambulances) and 15 Czech volunteers joined the operation. All of them are non- profesionals and use their holidays for this action. One of our Ukrainians friends from security community following  us saved his  holiday a long time ago and instead of to spend it with his family ( after a really long time) he have preferred to follow us. Those heroes we are obliged with a great respect.

We are working on a couple of similar projects and operations.

We wish to thank these companies:

PENAP s.r.o.  – providing 8 cargo pallets of medical material for this operation and many more for another

Biorůže portal  for  a cargo pallet of disinfection

Winepro s.r.o. For providing its van and money they have provided  for the fuel.